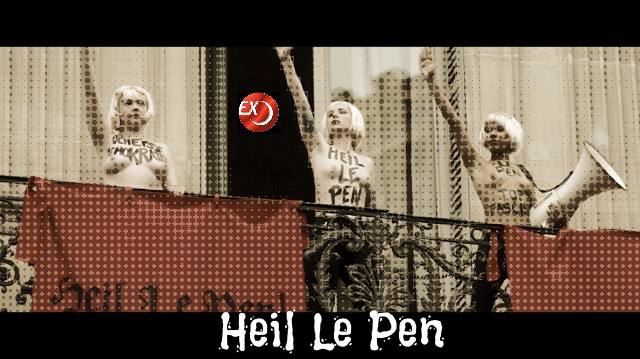 Far rights are not against Islamism, they in fact empower the Islamists !!

French far-right presidential candidate Marine Le Pen vowed Thursday to issue fines to Muslims who wear headscarves in public, as candidates made a final push for votes three days ahead of an election seen as increasingly close.

Le Pen explained how her pledge to ban the headscarf in all public spaces would be implemented, saying it would be enforced by police in the same way as seatbelt-wearing in cars.

”People will be given a fine in the same way that it is illegal to not wear your seat belt. It seems to me that the police are very much able to enforce this measure,” she said.

French President Emmanuel Macron will face Marine Le Pen in the second round of the country’s presidential election, setting up a rematch of their runoff contest in 2017.

Centrist Macron and Le Pen, a long-time standard-bearer for the French far-right, were the top two candidates in the first round of Sunday’s vote, picking up 27.8% and 23.2% of the ballots respectively, according to the French Interior Ministry.
Twelve candidates ran for the top job. Since none of them received more than 50% of the ballots in the first round, the top two candidates will face each other in a runoff on April 24.

on the other hand, the islamists have started their propaganda against the western secularism, pretending they are the victim of modernism, and the french lacite.

We, at the Central Committee of Ex Muslim in Scandinavia believe that far right movements and neo-fascist candidates are not the solution for the political Islam movement in the middle east and in the west. The far right figurers, in fact justify and promote Islamism. We, the Ex Muslim living in Scandinavia see our movement as the 3rd camp, and support vanguard, human based and universal values.

The NFT of the week, names as ”Heil Le Pen” belongs to vanguard FEMEN demonstration against the far right candidate Marine Le Pan.

Link of the NFT on OpenSea: